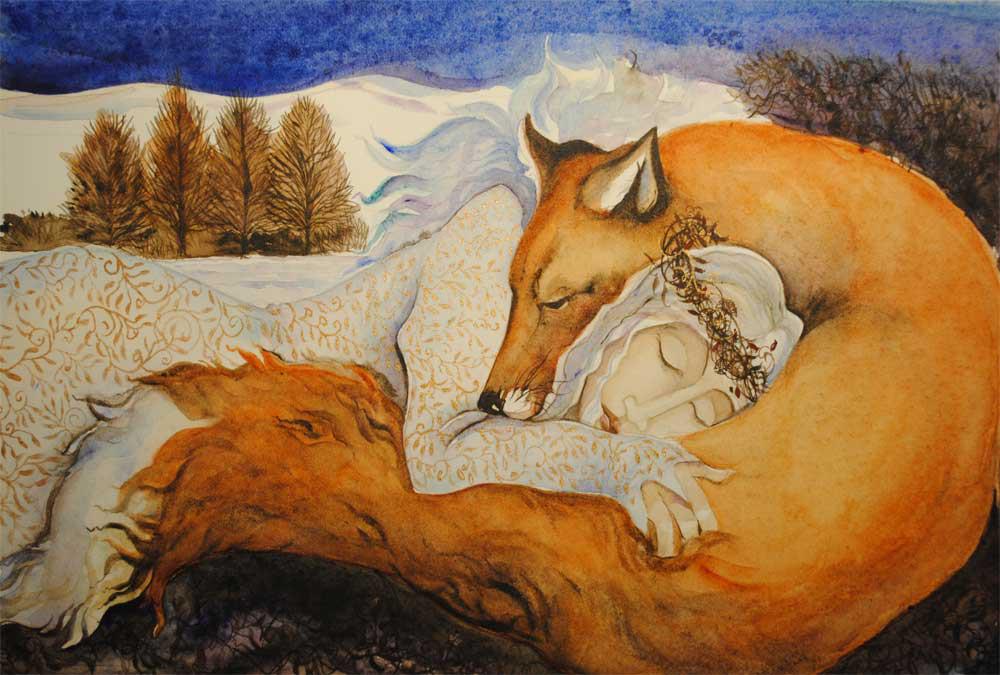 My Healing with the Masculine

The Sacred Mythology of Fox Medicine

As I dive into deep healing of the wounding I have been engaged with over my relationship with the masculine, I ask, “What is the evolution of this painful story?”

The only way to heal is to allow a vision of an elevation to arise.

What has emerged from that prayer and meditation is a true story that is also a mythology. This story is a Medicine story, meaning that it is shared in a ceremonial way.

I offer it to you in that way. May it serve an awakening of healing and elevation within you.

One day, several years ago, as I walked on my favorite trail, just beyond my back yard, I came around a bend to see something run from a big winding Oak tree. I thought “Fox!” and then immediately thought how silly that was. A fox? During the day? Must’ve been a cat or a raccoon.

But as I came around the bend, there he was. The fox, who had just been up in the tree, standing there, looking at me.

Letting me look at him.

“Thank you! Thank you for letting me see you!” and he turned and ran off the trail, disappearing into the leaves and vines.

The next day, I made a prayer with the Chanupa, the Sacred Pipe, and asked to have a deeper relationship with Fox Medicine.

A few days later, before heading out onto the trail, I stopped in at the altar of the Wise Woman. She had just started speaking to me. She told me that, in addition to tobacco, I needed to bring sweet grass with me. So, without question, I took the sweet grass, curious about when and where I would offer it.

As I turned onto my favorite trail, I found a golf ball with a hand-written number thirteen, circled. “Okay. Nature Oracle time!” I thought with excitement. And just moments later, after stopping at the wild honey bee hive and giving some tobacco and prayers of gratitude, I came around a bend and there he was again - the fox. Only this time, he was dead.

I gasped and in an instant I recognized that he was my brother and that he had given himself to me as an answer to my prayer with the Chanupa. Deep sorrow, deep humility, and deep reverence came over me, and then I knew why I had been told to bring the sweet grass.

I knelt by his side. I took the braid out and laid it down on his heart. No signs of injury. His body was soft still. A few ants on his closed eyes. I was overcome with so many feelings at once. I prayed and asked how I could possibly honor this life. I was instructed to “Do ceremony with me.”

So, I wrapped him up in my shirt, and carried him back home with me. I laid his body underneath the Acacia tree that once stood in the back yard. I sent a message to George Gray Eagle, our medicine man, asking for guidance on what a proper ceremony might entail.

I soon received a response. Two brief sentences about how to skin him. “Oh. That kind of ceremony.” I had never skinned an animal before. I had done some skin preparation with Martin Prechtel and had an idea on how to treat the skin, but that was it.

My friend, Ayden, held space for me, and with sage, tobacco, and sweet grass, I made a prayer to ask for help to honor this medicine and be with this ceremony in a good way.

Slowly I took apart his body, starting with the skin. I delicately cut where George had instructed and with ease, his skin slipped off like a tight glove. The intimacy of the experience was profound. I opened up his belly and put my hands inside of him. I pulled out his organs. They looked so perfect. I buried them and the bones in the East with prayers and sacred offerings. I took his head and his heart and buried them in the garden.

I stretched out his skin on a board panel, rubbed it down with salt, and planned to attend to it the next day.

I gave thanks for the immense offering and the precious experience of taking my spirit brother’s body apart. I still couldn’t really take it all in. So many messages, so many gifts in this experience. And the question that hung in my head: “Why had he offered himself – given his whole life – to me?”

When I awoke the next morning, I was sick. I had a fever and felt pain all over my body and a deep fatigue. I had to stay in bed, resting and dreaming with the Fox. It was as though I was purging or somehow overwhelmed by the intensity of it all.

The next day was a Monday and I had to work. So many appointments I threw myself into. Telling myself I would get to the skin when I was done. But at the end of the day, I was still feeling the edges of my returning health and turned in early to rest.

The next day was clear. I could finally attend to the skin. I got up early and went straight to work. But to my utter shame and sorrow, the skin had become infested with all sorts of tiny predators. The hair was coming off in clumps, and it looked awful.

Normally, I am pretty good at forgiving myself for mistakes, but this felt unforgiveable. I immediately decided to never tell anyone what I had done. I would just bury it and say that was the plan all along. I was so overtaken with grief and shame, that I went into the shadow of denial and hiding my transgression. What’s worse, is that shame created an inability to attend to the skin even then. I tucked it away where it couldn’t be seen and left it.

At that time, I was teaching a weekly course about the 13 Sacred Feminine Archetypes (Wise Woman is one of them). This week, we were focusing on the Goddess of Compassion. I was tuning into Her and also carrying the grief and shame of the Fox in my heart. This particular combination created an opening.

As I sat at my altar, the Fox spoke to me through the lens of compassion. He said “I gave myself to you because I am your brother and you needed me. I knew you were going to fuck it up – taking my skin, that is. It doesn’t matter, and in fact, that is the whole point. THIS is the Medicine. The offering is the Medicine. Not my skin. Your intimate connection being in ceremony with me was the gift. Not some impressive remnant to put on your altar.”

It reminds me of the story of Christ, who gave his body as a gift, and also the story of Chinnamasta. She is in the forest with her mentees and they are complaining of hunger, so without hesitation, she chops off her own head to feed them as a symbol of living in trust and pure devotion. The offering of the small self in service to life and love. The humility that was infused into me from it all was actually painful - to take in the possibility of being worthy of such a Noble and generous gesture, especially since I had not shown up in a good way.

Finally, I did get to attend to his skin. Enough time had passed that I dug his head up from the garden and, again with sage, tobacco, and sweet grass, I cleaned the skin. Anointed it, and wrapped it tightly around the now white and clean skull that had been dutifully prepared by all of the tiny creatures below the surface of the earth. I bundled these up inside of red wool felt and it sits at my altar now as a reminder of the true gift, the many lessons, and the BIG Medicine from this often undervalued animal ally.

So, in my prayer to heal the story of the masculine that attacks, or is absent altogether, I was brought back into the Medicine of Fox. The presence, the generosity, the compassion, and forgiveness. Acknowledging my own abandonment, shadow, and denial, and forgiving it within and without.

The liberation from the old painful story of being harmed requires the liberation of all players. Letting myself off the hook requires letting everyone else off as well. My Spirit Brother, Fox showed up for me as an embodiment of the Sacred Masculine as a provider and a liberator; that is undeniable and is far more precious than anything I could or would ever ask for.

I am sitting with the depth of this potent journey. The journey with love that continues in countless forms.

May this story serve to help you find your own liberation through compassion and forgiveness through the Sacred Masculine eyes of Fox Medicine.

If you would like to explore your possibilities of elevating painful wounds and repeating patterns into transformation and deep healing, I invite you to receive some one-on-one time with me to look at how my programs can help you :: CLICK HERE :: to fill out an assessment and schedule some time to talk with me now.